An aggressive hunter with a strange head

The great hammerhead (Sphyrna mokarran) is the largest species of the hammerhead shark. It can grow up to 6 metres long and is said to be the most aggressive of the hammerheads. Although hammerheads are well-known as man-eaters (human remains have been found in the stomachs of captured hammerheads, and direct attacks on swimmers have been recorded), free diving in their vicinity is possible. Still, it must be done with respect, and without provocation. Hammerheads feed on fish, rays, and invertebrates. Larger specimens may attack other sharks. Unfortunately, like many other shark species, hammerheads are hunted for fins, which are valued as the main ingredient of the particularly popular shark fin soup in Asia. All hammerheads are listed as endangered by the International Union for Conservation of Nature (IUCN).

Great hammerheads prefer to hunt at dawn or dusk. Their diet is varied, ranging from invertebrate crabs and lobsters to bony fishes, sharks, and rays. The hammer-shaped head is especially useful while hunting. Thanks to it, the great hammerhead hunts, for example, rays, crushing the fleeing prey down to the seabed with one side of its head, then swinging the prey to the other side to bite its fins. With this circular movement, the shark eats up all the catch. Also, the hammerhead does not miss flocks of fish, such as sardines, herrings, anchovies, saurels, or mackerel. Giant groupers and flounders also make up a significant part of the diet, but great hammerheads won’t turn down squid or octopus either. They use their sharp teeth when catching prey but usually swallow the victim as a whole. As it often is in the wild, large specimens are in a higher position than smaller ones in the food pyramid, so larger sharks may end up eating smaller species, such as tiger sharks, or even killer whales. 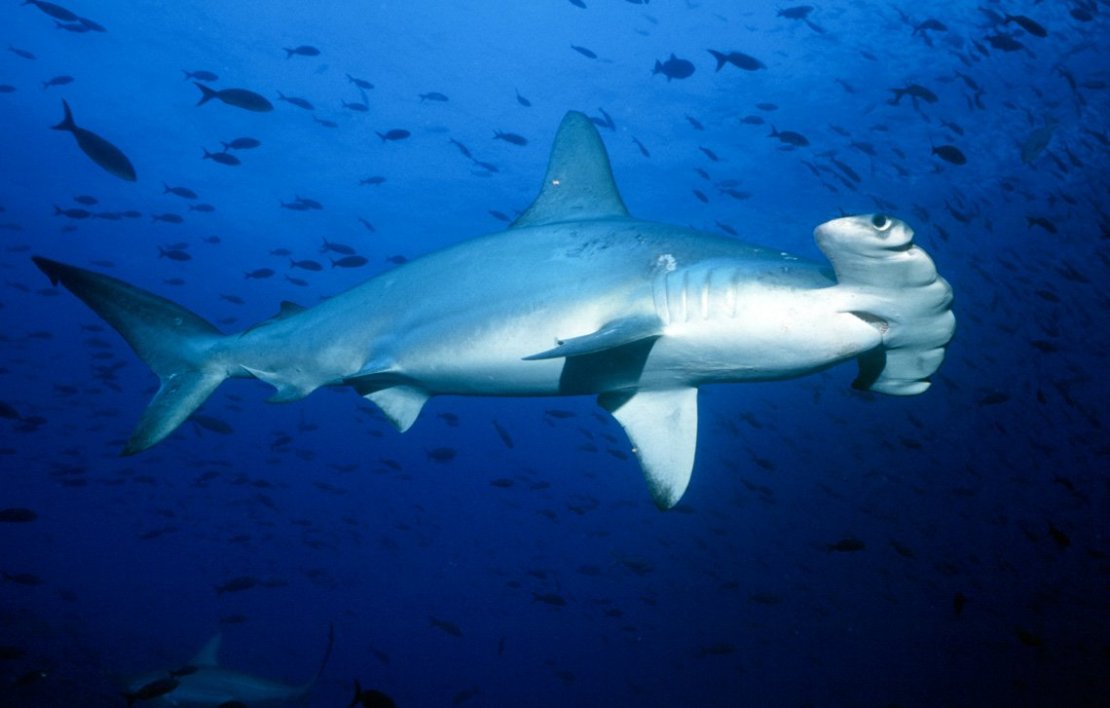 The great hammerhead shark is quite similar to all other sharks and can mainly be recognised by its head. Unlike the scalloped hammerhead shark and the slightly convex smooth hammerhead, its head is straight, with clearly defined internal and external notches. The width of the head is about 23 to 27% of its total body length. Another distinguishing feature is its large, curved, sickle-shaped first dorsal fin. Giant hammerheads can grow up to 6 metres long, and weigh more than 500 kg, but are usually about 3.5 to 4 metres long. Hammerheads have 13 to 15 triangular pointed teeth on each side of the upper jaw, and 12 to 14 on each side of the lower jaw.

But why do hammerheads have such a strange shaped head? This has been a secret for biologists for decades. Over time, a variety of theories have emerged, but according to experts of the University of Hawaii, later joined by most scientists, the explanation is much simpler than expected. The hammer-shaped head allows the sharks to go through more than twice the width of the seabed, considerably increasing the catch. Some Hawaiian biologists also suggest that hammerhead sharks are more agile than other sharks. For example, they can turn faster and steeper when following their prey. Their unique head seems to act as a manoeuvring fin. 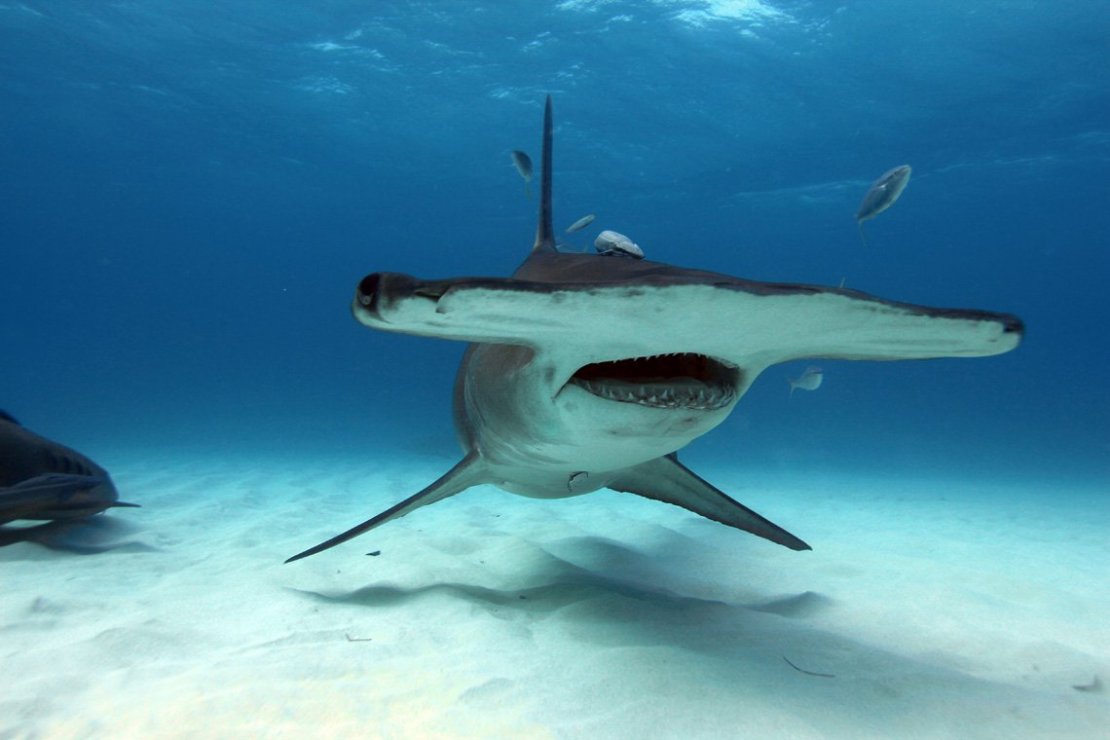 Reproduction of hammerheads is relatively easy. Males do not have to chase females in the open sea. They have to make their way into a group of females and make their choice. Then they separate from the group by playing and biting each other all over their bodies. Mating occurs on the move, when the male is above the female, and holds himself, biting her fin. Pregnancy lasts for about 11 months. Like other hammerheads, great hammerheads are very viable. Females give birth to 20 or even up to 55 offspring in shallow waters, usually once every two years. The offspring range in length from 50 to 70 cm. After birth, the offspring separate from the mother and take care of themselves. Females reach sexual maturity when they are 2.5 to 3 metres long, and weigh 41 kg, males when they are 2.3 to 2.8 metres long, and weigh 51 kg. Hammerheads usually live for 20 to 30 years. Exceptionally, some of the oldest specimens may live up to 50 years. 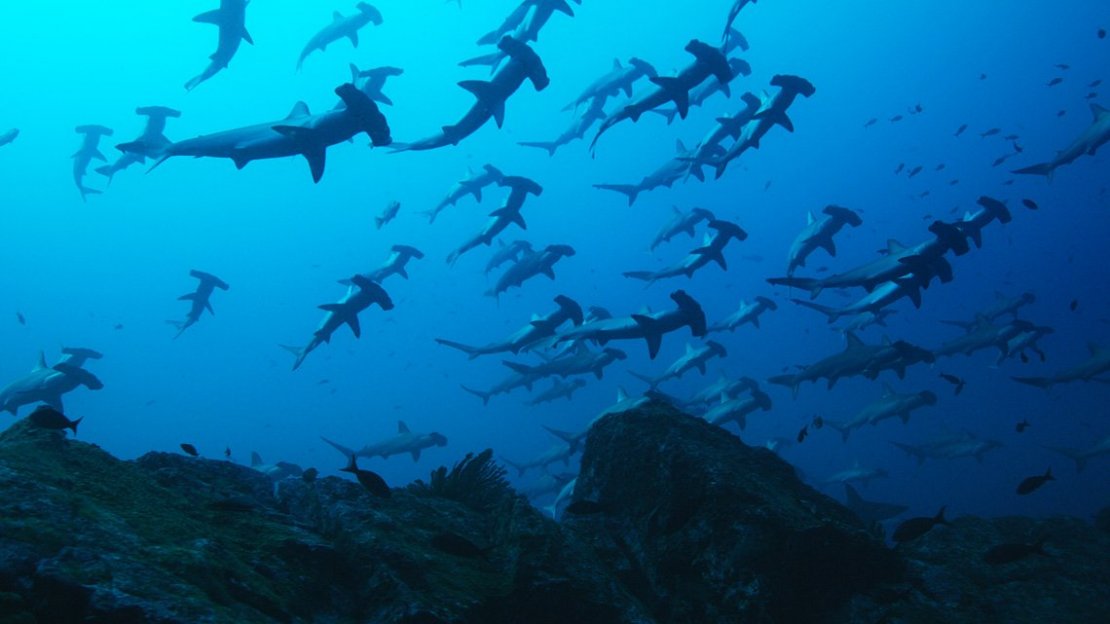 Unlike other hammerheads, great hammerheads enjoy slightly warmer waters. They prefer depths of about 30 metres but can be encountered at depths of up to 300 metres. They live mainly in the western Atlantic (from North Carolina in the US to Uruguay, including the Gulf of Mexico, and the Caribbean Sea), in the eastern Atlantic (from the Mediterranean Sea to Senegal), in the Indo-Pacific (from the African coastline to New Caledonia and French Polynesia), and the warm waters of the eastern Pacific (from California in the US to Peru). In summer, they travel long distances to cooler waters. They live both near mainland and islands, as well as in the high seas. Divers encounter hammerheads mostly on the slopes of coral reefs and adjacent sandbanks. The biggest chance to meet a great hammerhead is in French Polynesia, New Guinea, the Bahamas, and the Caribbean area. The great hammerhead lives alone.

Offspring: 20 to 55 in one brood every two years
Length of a newborn: 50 to 70 cm
Sexual maturity: females 2.5 to 3 m long, males 2.3 to 2.8 m long
Why do hammerheads have a hammer-shaped head? It allows them to go through more than twice the width of the seabed, considerably increasing the catch. 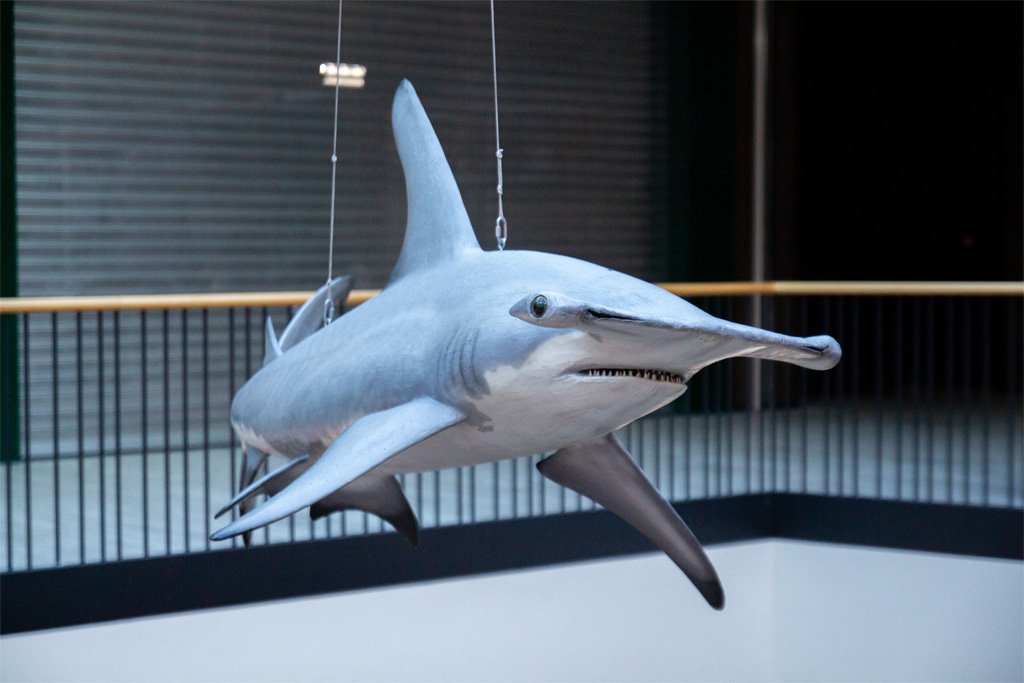 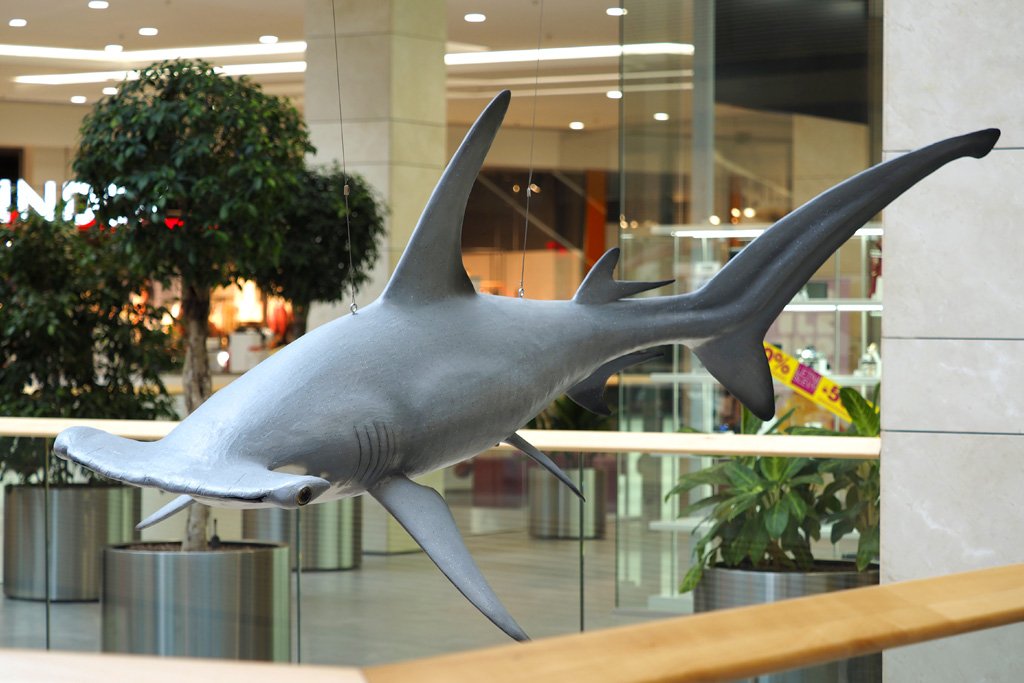