An ideal coastal predator living in most ocean waters

The great white shark, or the great white, can be up to 6 metres long and weighs about 3 tonnes. Its life span is over 70 years, which makes it one of the longest-living cartilage fish. It’s also one of the fastest sharks. For short distances, it can reach the speed of up to 56 km/h. As the great white has been responsible for the majority of shark attacks on humans, it was formerly called a man-eater and was systematically destroyed by sailors and fishermen alike. The persecution of great white sharks gained momentum even further after the film “Jaws” was screened. In reality, however, sharks don’t hunt humans deliberately, and the number of fatal attacks per year is only about 1.5. They feed primarily on sea fish and mammals, and to a lesser extent on reptiles and birds. Besides human beings, the only enemy of the great white shark is the killer whale. According to the International Union for Conservation of Nature (IUCN) criteria, it’s a vulnerable species that may soon be in danger of extinction. 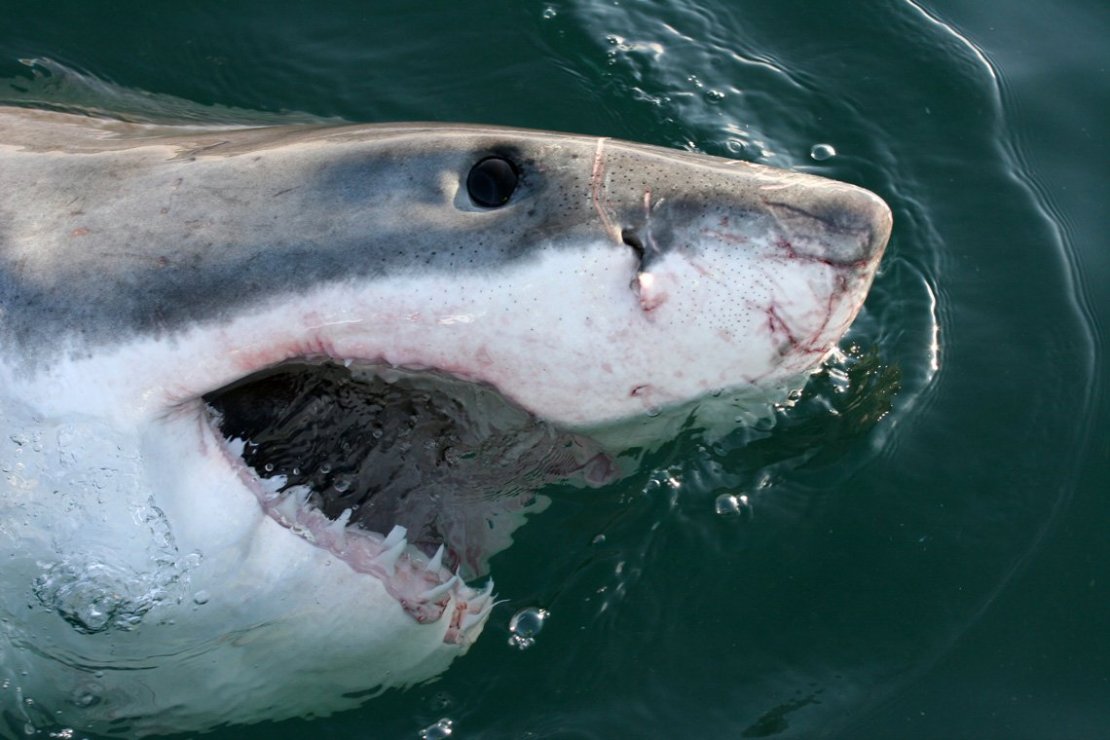 Great white sharks are predators that feed on fish (mainly tuna), other sharks, rays, marine mammals (cetaceans, seals, otters), sea turtles, and birds. Young specimens attack fish mainly because their jaws and teeth are not yet mineralised enough in order to hunt larger animals more effectively. When young sharks grow up to 4 metres, their main prey will become mammals.

In most cases, the great white attacks the prey from below by swimming upwards at an incredible speed. After the attack, the prey is submerged until it no longer defends itself. Near the California coast, sharks kill seals by biting deep into the back of their body and letting the victim run out of blood. California sea lions are attacked abruptly from below, and bitten in the middle of the body. Dolphins, Fraser’s dolphins, and harbour porpoises are attacked from above, behind or below, so that they can’t notice the shark by echolocation. When hunting sea turtles, the great white tries to bite them around their fins. Great white sharks mainly hunt in the morning, probably due to poor visibility. Thanks to their extremely advanced olfactory sense, the shark can smell even a small amount of blood (1 drop per 4.6 million litres of water). 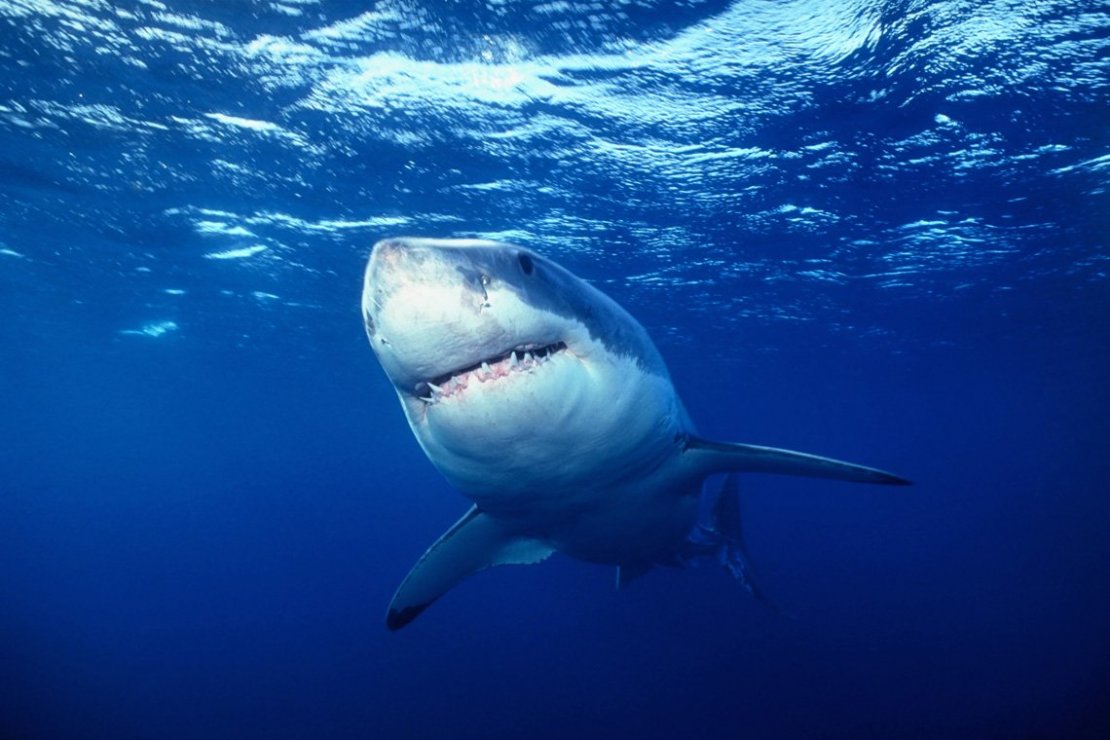 Adult specimens usually grow 4 to 5.4 metres in length and weigh 680 to 1,100 kg. Females are generally larger than males. The largest measured specimen was also a female: 6.4 m and 3,324 kg. Although sharks are expected to reach a length of 7 m, there is constant controversy about it. Great white sharks continue to grow after they reach sexual maturity, although their growth then slows down. Therefore, the oldest specimens are also the largest.

Like other sharks, great white sharks have a special ability to detect electromagnetic fields generated by the movement of live animals by means of the so-called ampullae of Lorenzini. The great white shark is capable of recognising a voltage of half a billionth of a volt. At short distances, it can recognise even unmoving animals based on their heart rate alone. 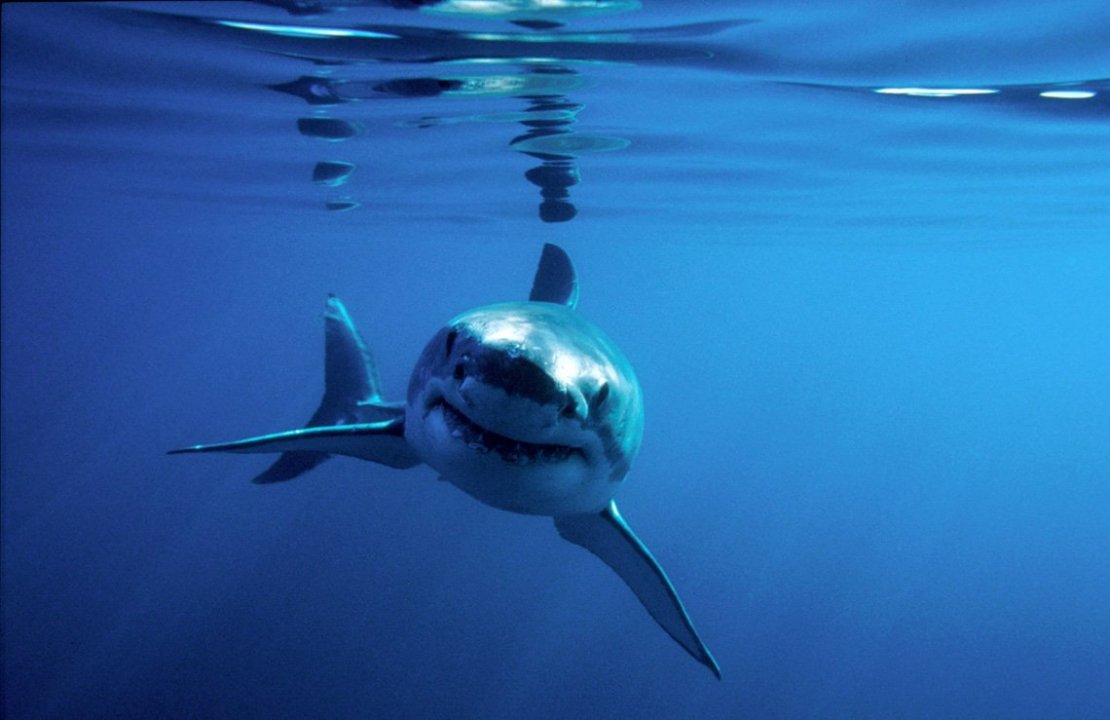 Almost nothing is known about the reproduction of great white sharks. Some evidence suggests that mating may be triggered by eating large carrions. Males become sexually mature at 26 and females at 33. Males live longer and grow slower than females. Sharks have ovaries, which means that eggs develop and hatch in the uterus and continue to develop until the offspring are born. Birth of a great white has never been seen, but it’s known that pregnancy lasts for 11 to 18 months. Newborn offspring are usually about 120 to 150 cm long. There are 2 to 10 newborns in a brood, sometimes more.

The behaviour and social structure of great white sharks have not yet been sufficiently studied. Hierarchy is usually determined by size, gender, and territoriality. They mostly hunt alone and try to solve conflicts by ritual movements, showing their size. Great white sharks occasionally bite each other, but this way of communication seems to be part of the normal social interaction of the species. Great white sharks are very curious creatures that show a high degree of intelligence and good communication skills. On the Seal Island, South Africa, clans of 2 to 6 specimens have been spotted getting closer to the coast and moving further again together. It’s not clear whether these are relatives, but the structure is likely to be similar to that of wolf herds. Each member has a certain status, and the clan is led by an alpha character. 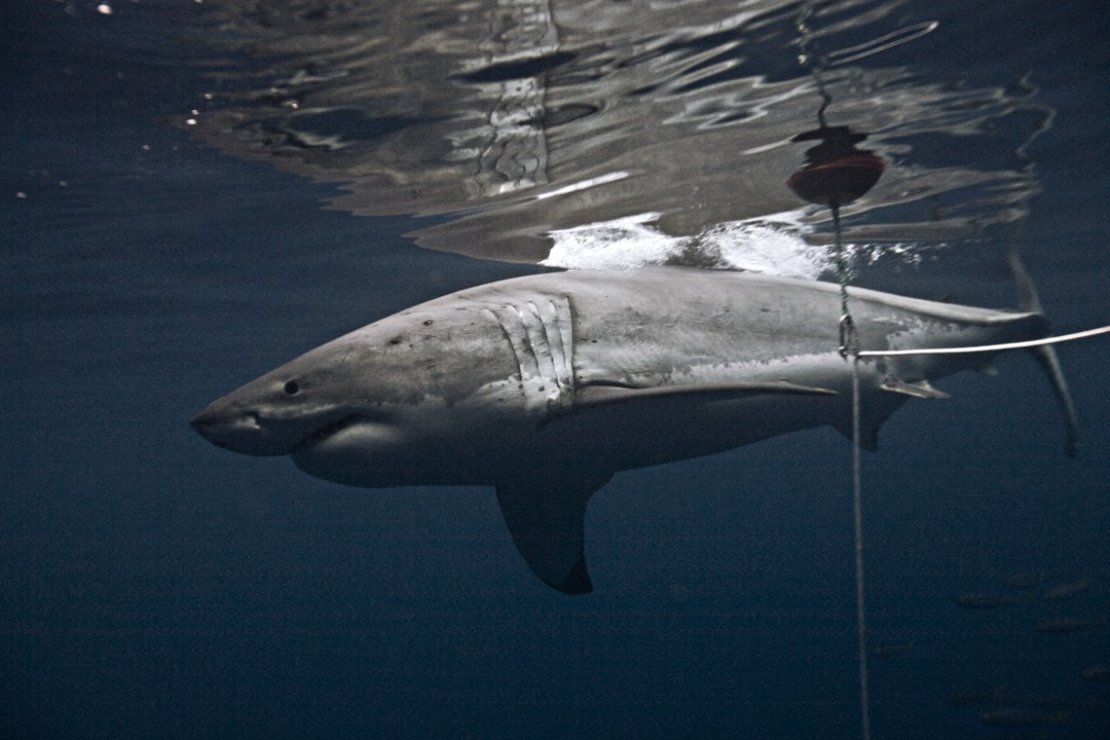 The great white shark lives in the coastal waters of almost all oceans and seas, where the water temperature is 12 to 24 °C. This species can be found more often in the US on the north-eastern coast of California, South Africa, South Australia, Japan, near some islands in Oceania, Chile and the Mediterranean Sea. Probably the highest concentration is in Cape Town, South Africa, where most of the research is done.

Great white sharks are considered to be epipelagic fish, meaning that most of their life is spent at depths of up to 200 m. However, recent studies have also confirmed that great white sharks are capable of long-distance migration. While migrating, they move slowly and reach the depths of approximately 900 m. In the open ocean, great white sharks have also been recorded at depths of up to 1,200 m. They travel, for example, between Australia and South Africa or between California and the Hawaiian Islands. One shark has covered about 20,000 km in less than 9 months.

Daily consumption of food: 30 kg of whale fat is enough for 45 days
Natural habitat: tropical and temperate regions – all oceans and seas with temperatures between 12 and 24 °C
Offspring: 2 to 10 per brood
Length of a newborn: 120 to 150 cm
Weight of a newborn: no data available
Sexual maturity: 26 years 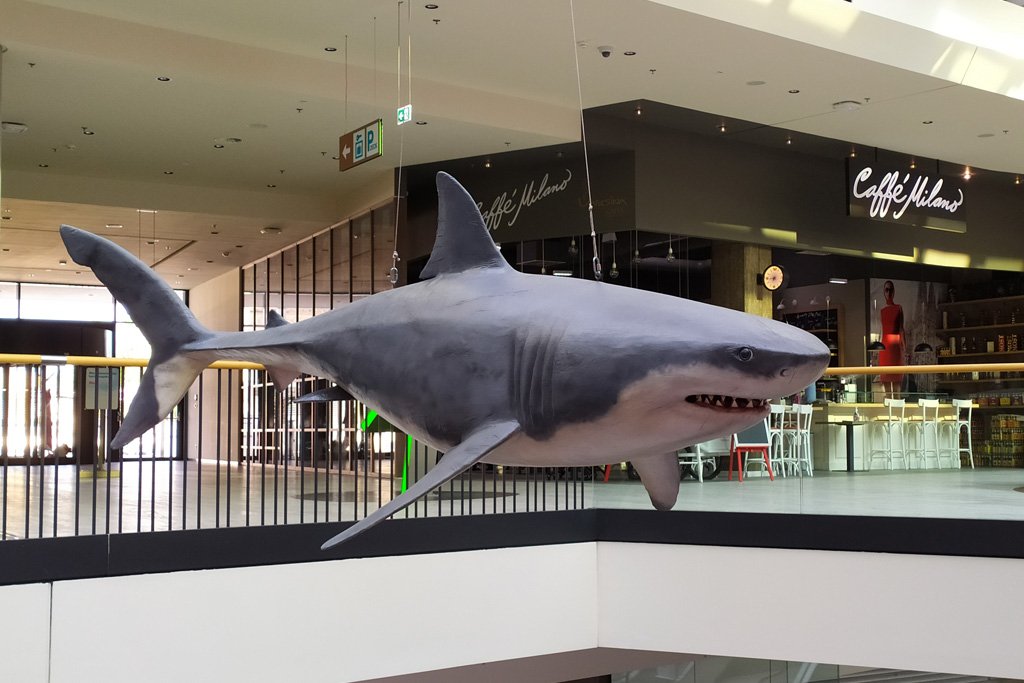 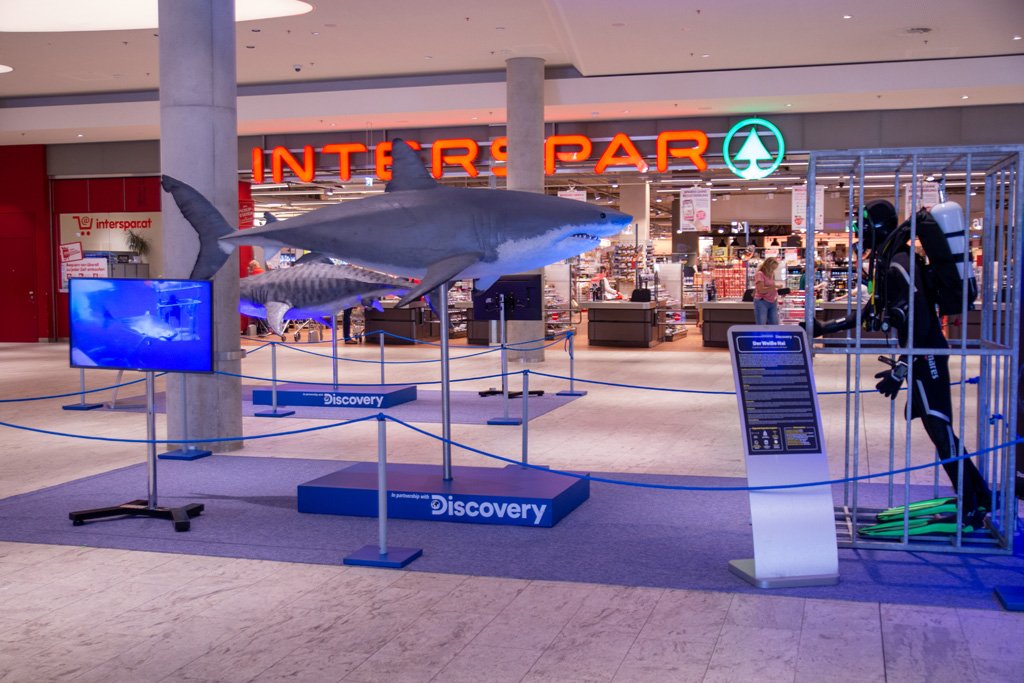