One of the most remarkable cetaceans in the northern hemisphere, also popularly called “unicorn of the sea”

Narwhal’s poetic name “unicorn of the sea” is, however, misleading, since its famous horn is actually a tusk, incisive tooth of the upper left jaw. The powder obtained from crushed tusks was previously considered to have magical and healing properties, especially to boost male potency, which led to massive narwhal hunting. Fortunately, nowadays, the interest is decreasing. They are still hunted but less intensively. Narwhals (Monodon monoceros) live in the seas of the Arctic Circle and can grow up to 6 metres in length. It belongs to the Monodontidae family, and its closest relative is the beluga whale.

The male narwhal body can be up to 6 metres long, and weigh 1,600 kg, in exceptional cases 1,800 kg. Females are smaller; their maximum length is 5 metres and weight 1,000 kg. Narwhal has become famous for its horn, which is over 2.5 metres long. As mentioned above, this is actually a tusk, a long incisor tooth in the upper left jaw. The spirally twisted tusk mainly develops in males. Only 15% of females have it, and it is significantly smaller than that of males. The right incisor is usually stunted: only about 2 out of 1000 specimens develop both upper incisors similarly. 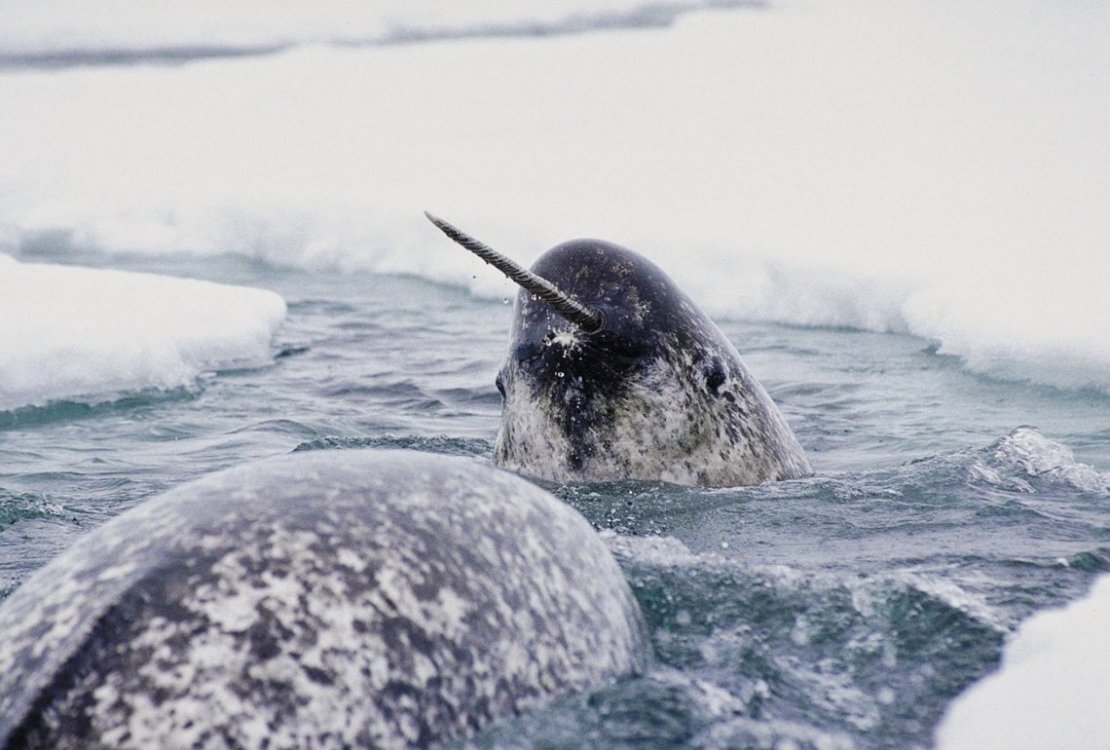 Experts have long been unable to answer the question of why this “horn” is necessary. Among numerous theories, one with a scientific explanation argues that it is a hypersensitive sensor. It helps narwhals to detect pressure, temperature, depth, and other important parameters for diving and navigating underwater. For example, it allows them to find spots of melting ice, so that they can break through it with their head (and not with the incisor). Like any water mammal, narwhals must find their way from beneath the ice to the surface for regular breathing.

Narwhals feed mainly on fish (their favourite delicacies are flatfish, halibut, and cod), and they won’t turn down molluscs, crustaceans, and other small marine animals either, which they suck into their mouth using their massive lips and tongue.

Narwhals interact with many different sounds, including humming, which would represent business card for individual animals in the human world. 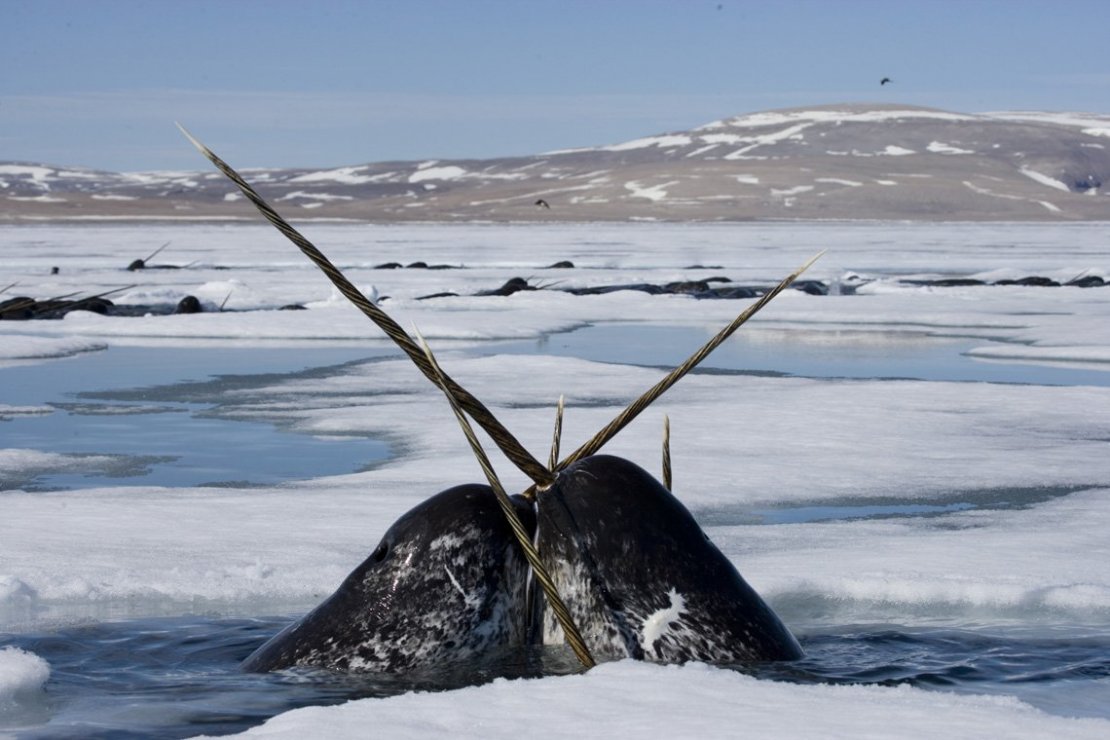 Pregnancy of a female narwhal lasts for 14 to 16 months. Usually, one offspring is born, and the mother takes care of them for a long time. Females feed offspring until they are 2 years old. The pups are almost black, the adult specimens grey-white, with dark patches on the back that fade with age. Males become sexually mature at around the age of 11 to 13, females much earlier, at the age of 5 to 8. Narwhals can live up to 50 years, but they usually die much sooner by drowning, when they cannot find a hole in the ice to breathe.

Narwhals live in small groups that include several females and males. Males keep a certain number of females around them. Like beluga whales, narwhals sometimes form large groups of thousands of animals, which can be subdivided by sex and age. 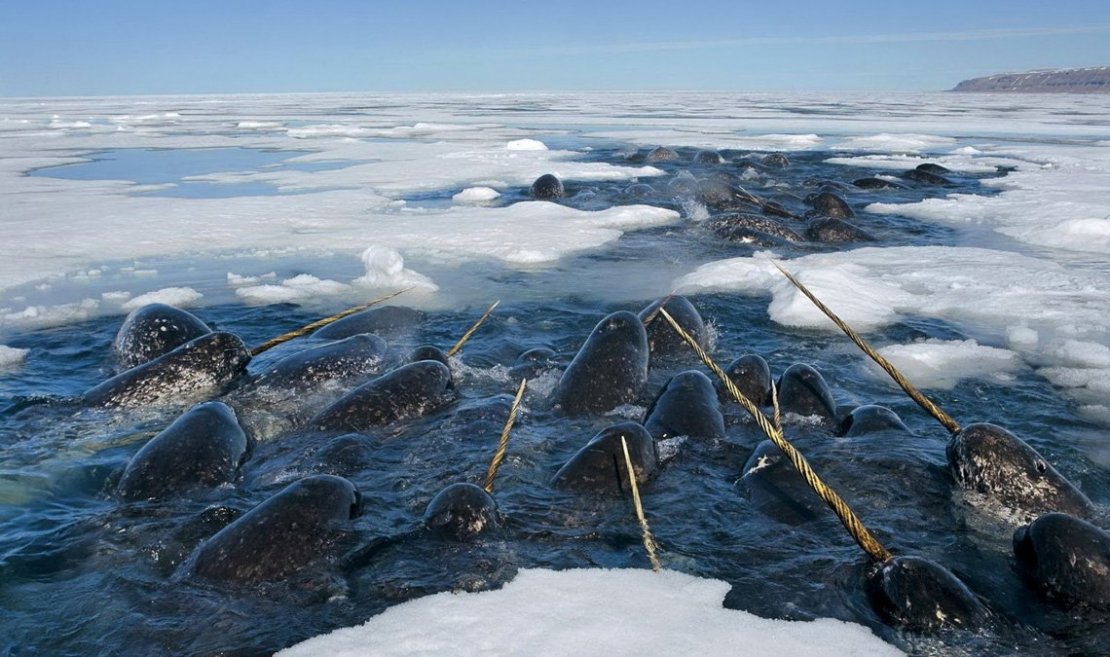 Throughout the year, narwhals live in northern regions, mostly on the Arctic-Atlantic border, or in Russian Arctic waters. As they mostly travel in areas covered by a continuous ice sheet, their occurrence is dependent on the presence of ice; and they are constantly migrating. In summer, narwhals move mostly near the coast and tend to retreat to more distant, glacial areas in winter. Often, they go surprisingly far below the ice sheet, using holes in the ice to breathe. When diving, they usually do not go deeper than 400 metres, but can exceptionally reach 1,500 metres, and remain submerged for up to 30 minutes. The current number of specimens is estimated to be between 50,000 and 70,000. 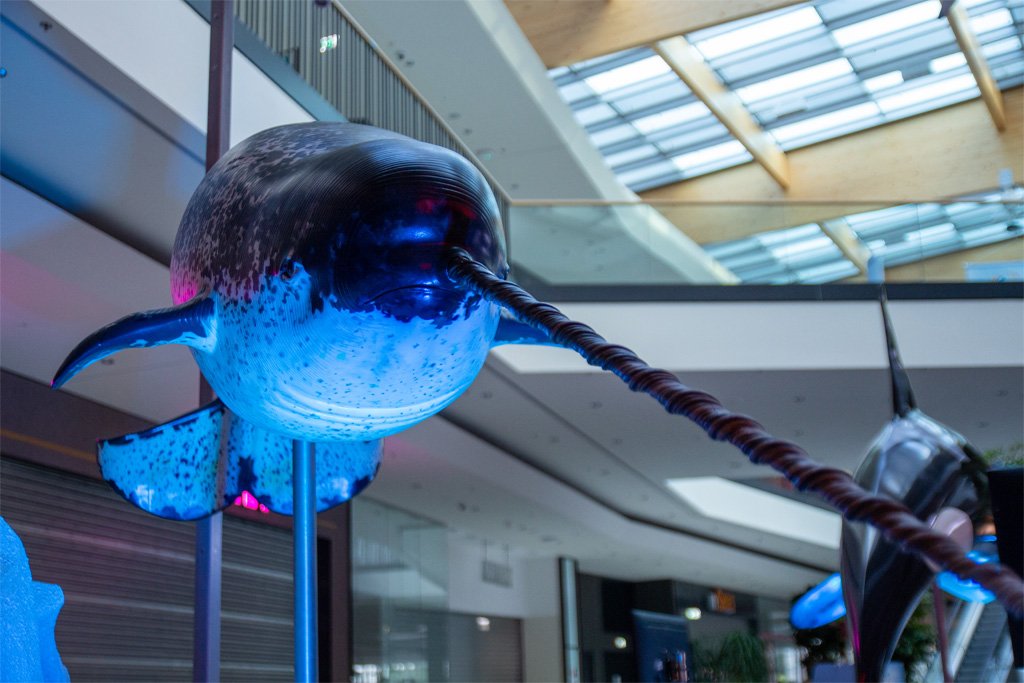 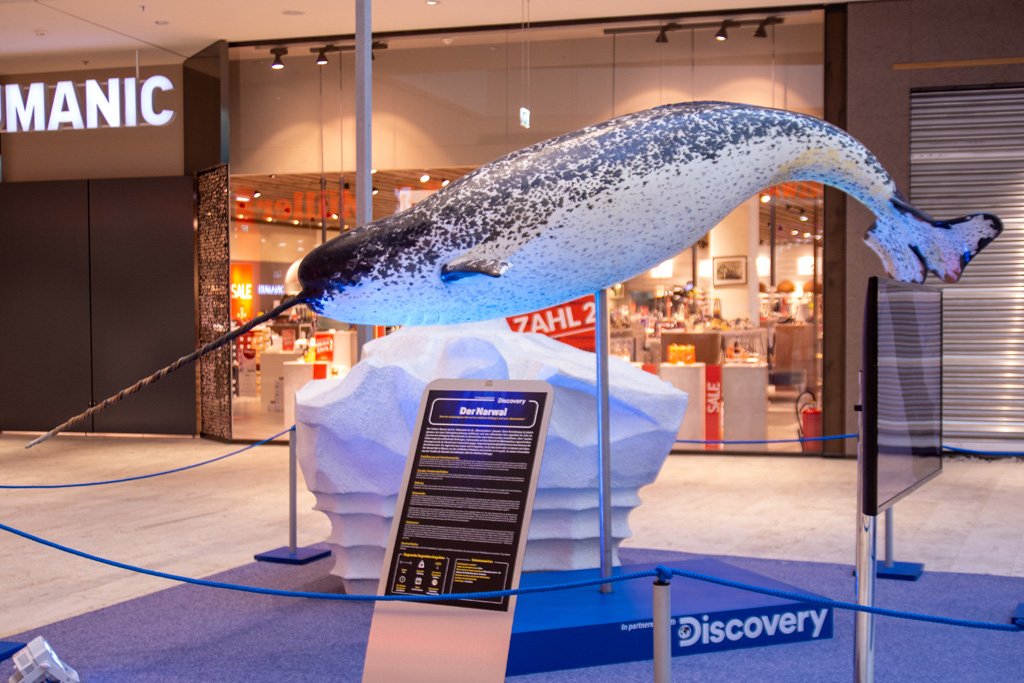