The common bottlenose dolphin (Tursiops truncatus) is probably one of the most well-known and most common dolphins in the world. Thanks to its intelligence and cute, constantly smiling appearance, it’s one of the most popular aquatic animals. On the other hand, the bottlenose dolphin is surprisingly considered to be the best organised and equipped predator in the world.

Dolphins have large brains. Compared to their body size, it is even bigger than the human’s brain. Therefore, they can easily agree not only on common things but also on hunting tactics. To communicate with other dolphins, they use whistling, clicking, or chirping sounds that together form a unique dialect. With these sounds, for example, the group cohesion can be maintained. Dolphins also use clicking for high-frequency echolocation, constantly creating so-called sound maps of their surroundings. To express other emotions and thoughts, dolphins also use sounds emanating from slipping their tail or body on a water surface. 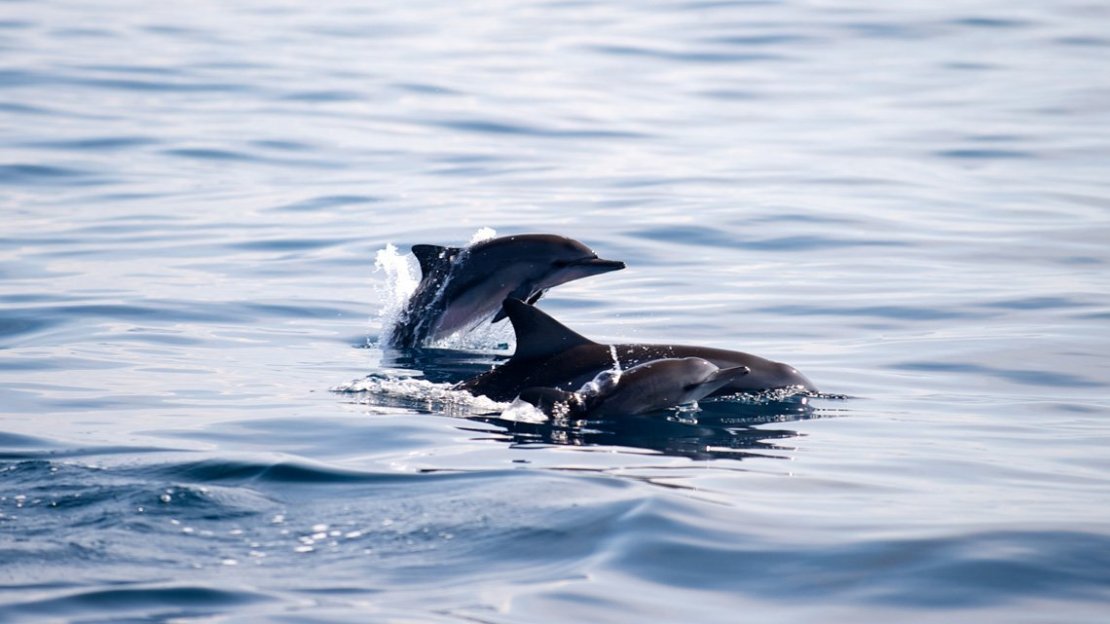 Dolphins are highly adaptable, feeding on a wide variety of species depending on season or habitat. Their diet mainly includes fish, but also jellyfish, squid, or crustaceans. Often dolphins hunt in groups. During the hunt, they perform a variety of difficult tasks. The fish flock is kept together by warning signals or intricate movements, but also by bubbles the dolphins create with their body, that scare the fish out on the surface. There they kill the prey with their tail or using a direct attack. Other hunting tactics include isolating weaker specimens from a larger flock or trapping them onshore. Teamwork is beneficial for everyone. Dolphins also use echolocation to search for octopuses hidden in the seabed sand, and masterfully stun the catch with a loud click. Then they swallow the prey. Although dolphins have sharp teeth, these are only intended for catching. Dolphins can eat up to 16 kg of food a day, but usually, the amount of food consumed daily is between 4 and 7 kg.

Bottlenose dolphins are distinguished from all other dolphin species by their slightly upward-facing jaws, which give the animals their characteristic smile. They can be quite a different size and shape, varying between individuals and groups in different geographical habitats. In general, we can distinguish between the two main groups: the smaller dolphins living in coastal waters (inshore dolphin), and the larger offshore bottlenose dolphin. For comparison, a tropical inshore dolphin is 2 metres long and has long fins, while dolphins living in the cold and high seas can be twice as large with fins proportionally smaller in size. On average, an adult dolphin weighs between 150 and 650 kg and is 2 to 4 metres long. 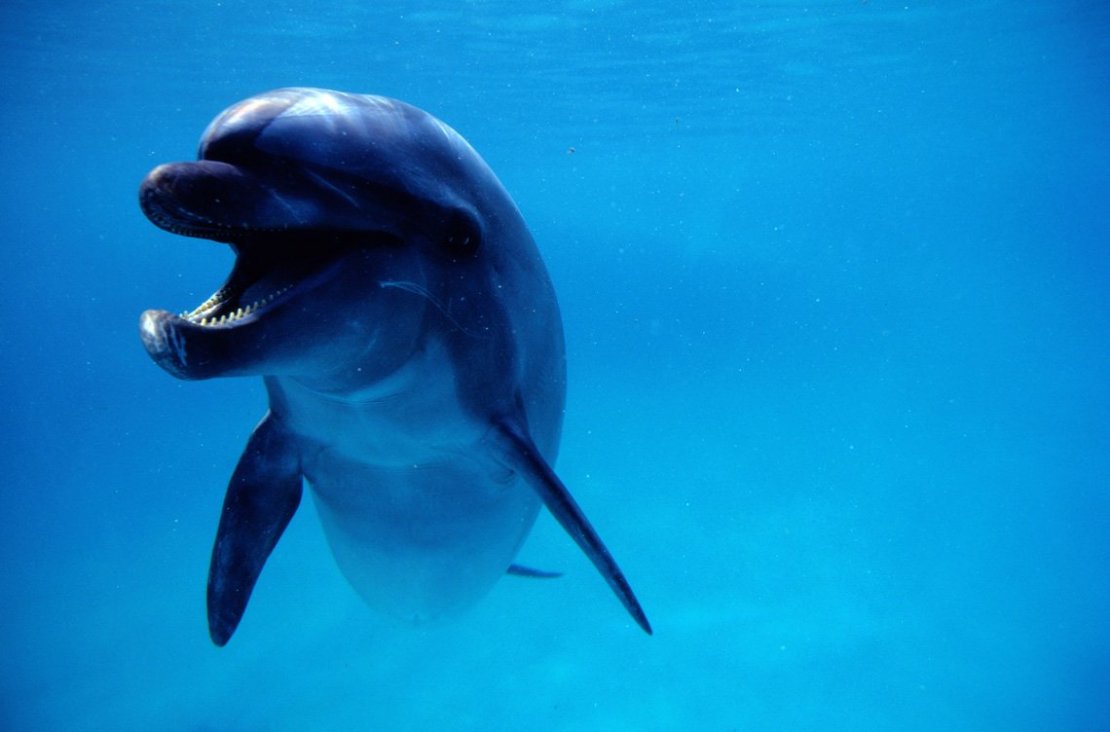 The common bottlenose dolphin and all its relatives are very social animals and live in groups, that usually consists of 10 members, close to shores, and up to 20 members in the high seas. On exceptional occasions, groups merge into huge groups of 500 to 1000 members. The size of a group is variable; it changes during the day. There is a hierarchy based on age, size, and gender. Large males predominate, with the largest female dominating in their absence 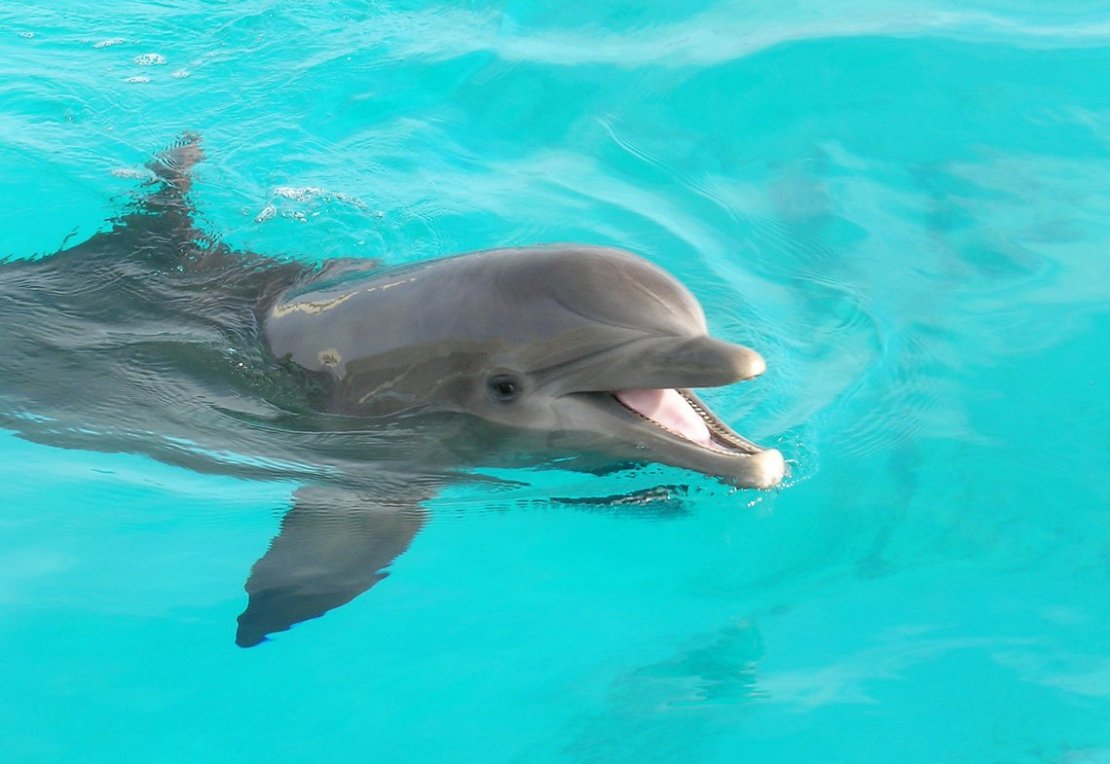 Bottlenose dolphins love to travel alongside boats, swimming in their waves, and jumping out of the water. The jumps can be up to 5 metres high and 10 metres long. The dolphins are often spotted in popular surf areas. Playfulness has a particularly important role in the life of dolphins; it represents the level of their intelligence and the fact that their large, constantly working brains need stimuli, as they work even during sleep. The dolphins turn off only one side of their brain while sleeping and observe with one eye that nothing dangerous is approaching. Every two hours, the task is taken over by the other side of the brain. If a group member gets wounded, it is in the dolphins’ nature to help them. 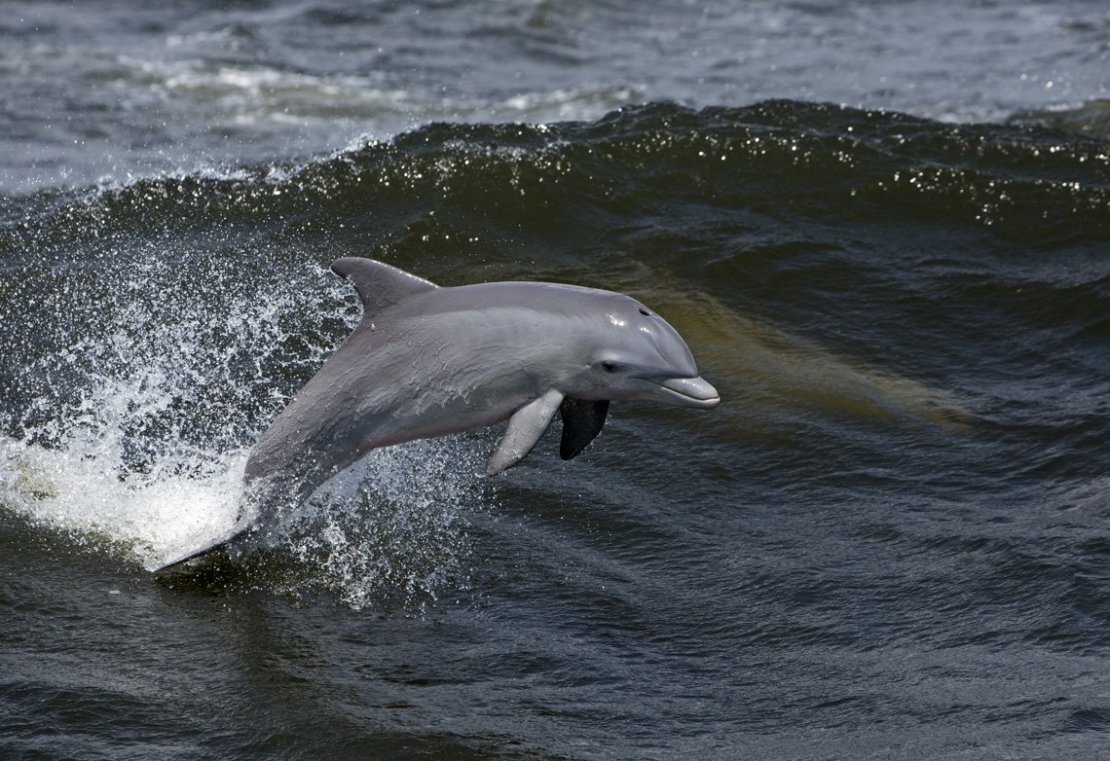 Male bottlenose dolphins are sexually active throughout the year but mating usually only occurs in spring or summer. Pregnancy for females lasts for about a year. Newborn dolphins are 80 to 140 cm long and weigh 15 to 30 kg. During birth, several females that are not yet sexually mature, so-called midwives, help the female and protect her from shark attacks. In addition, they help the newborn to reach the surface to breathe for the first time. The females feed their offspring for up to 18 months, but at the age of 6 to 7 months, they teach them hunting and feeding on fish. When educating their young, the dolphins may also punish them by pushing them towards the seabed or surface. Females take care of the offspring for 2 or 3 years. Females reach sexual maturity between the ages of 5 and 10, males at the age of 8 and 13. Dolphins live up to 50 years. 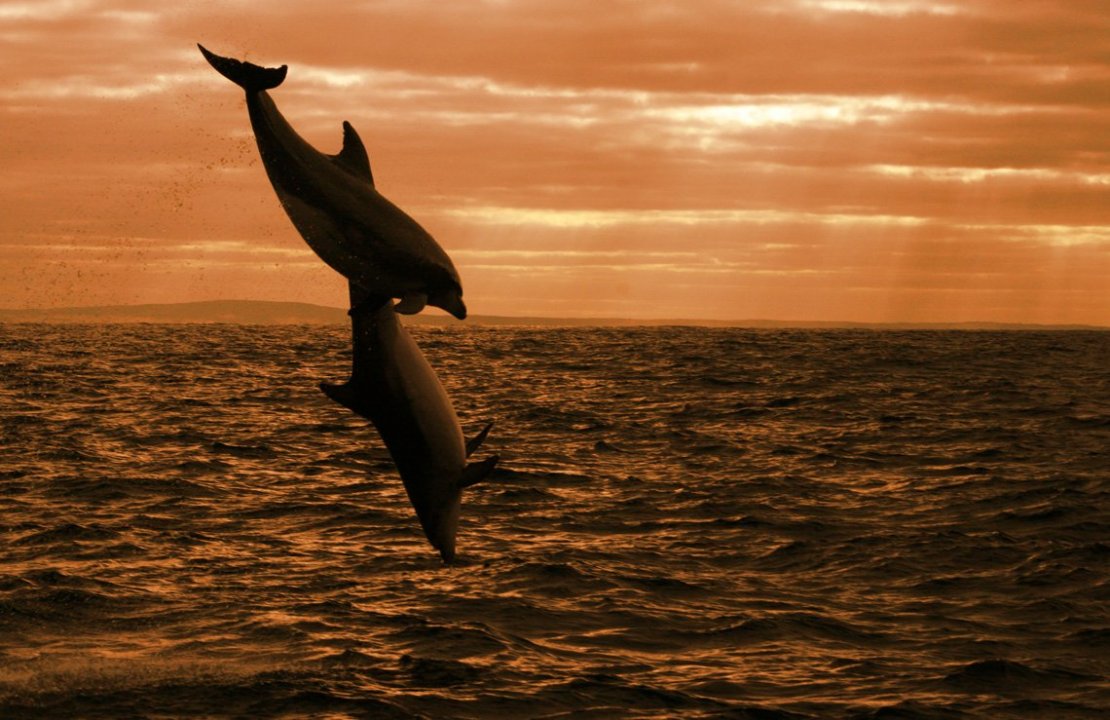 Common bottlenose dolphins live in all seas and oceans of tropical, subtropical, and temperate zones. They can often be found in the Mediterranean Sea, Black Sea, or the Red Sea, but due to their intelligence and friendly behaviour, they are also forced to live in many dolphinariums and zoos. In 1930, the population of common bottlenose dolphins was estimated to be between 1.5 and 2 million individuals; nowadays it is only 100,000. According to the International Union for Conservation of Nature (IUCN), it is the “least concern” species with a large stable population.

Length: up to 4 m
Weight: up to 650 kg
Swimming speed: up to 50 km/h
Life span: up to 50 years
Natural habitat: tropical and temperate region
Threat status: least concern species

Jumping out of the water: up to 10 m in length, up to 5 m in height
Dive depth: up to 500 m
Dive time: up to 10 min
Mating time: 10 s
Daily consumption of food: up to 16 kg
How do you know if a dolphin is sleeping? They lie near the surface, and their tail fin is drooping.
What’s the name of the famous dolphin fishing in the Faroe Islands? Grindadráp.
Who’s the closest relative of the cetacean class that includes the dolphin family? The dolphins share common ancestors with even-toed ungulates. 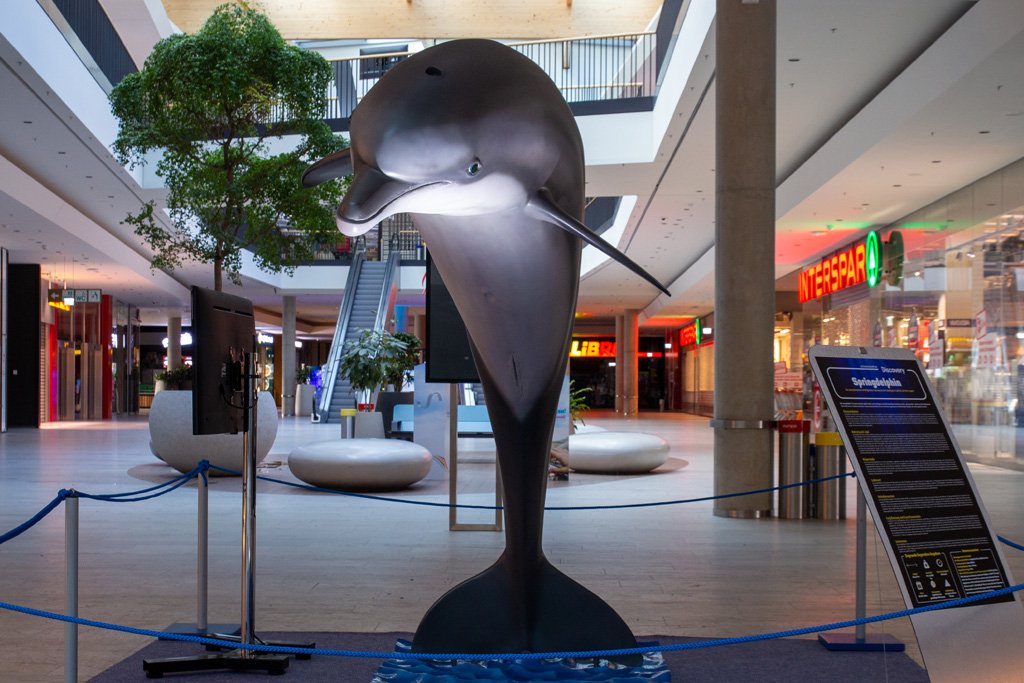 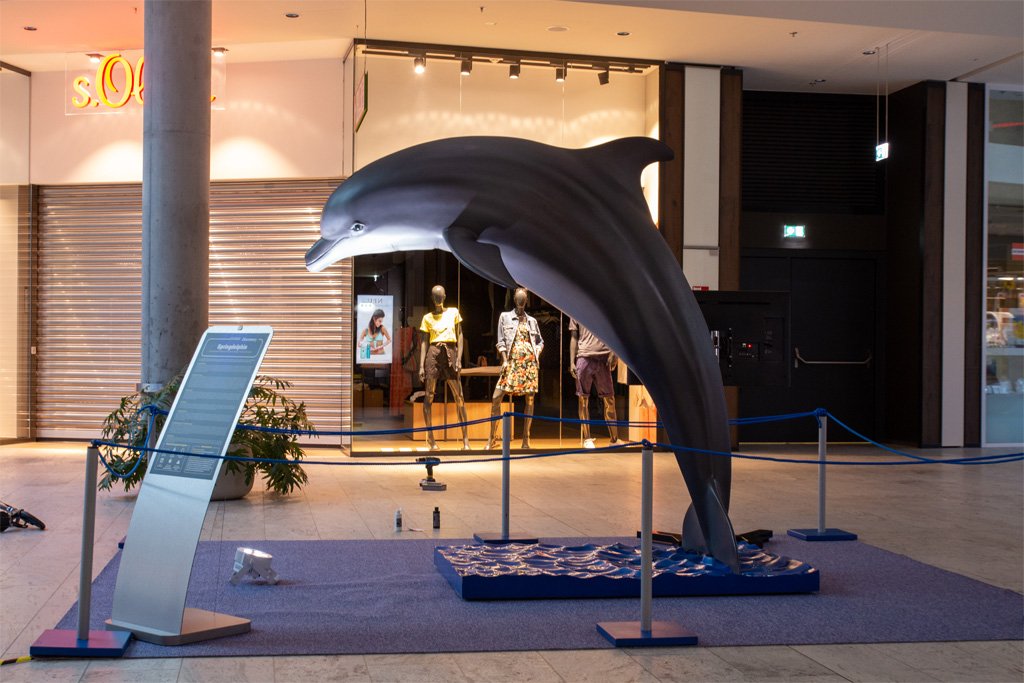