The sperm whale (Physeter macrocephalus) is the largest toothed whale currently living, and it’s believed to be the largest toothed animal that has ever lived on our planet. The largest documented specimen was probably about 28 metres long and weighed 150 tonnes. It’s a whale with a giant head and distinctive shape, holding several world records (the largest toothed animal, the deepest diving mammal – 3,000 m, the largest brain - up to 9 kg, the thickest skin without subcutaneous fat - up to 36 cm). In addition, it plays a main role in Herman Melville's novel Moby Dick, which makes it a legend among ocean creatures. Many people still describe Moby Dick as a whale archetype. The sperm whale lives up to 80 years.

As mentioned, sperm whales are the deepest diving mammal in the world. They are thought to be able to dive up to 3,000 metres deep and stay underwater for up to two hours. Typical dives take place at depths of about 400 metres and last between 30 to 45 minutes. Sperm whales feed on a variety of animal species, mainly cephalopods, squid, and other seabed creatures, and have a good appetite: their daily food consumption is equivalent to about 3% of their body weight. Sperm whales are estimated to consume 100 million tonnes of deep-sea creatures each year, equivalent to the annual consumption of all humans and other marine animals. 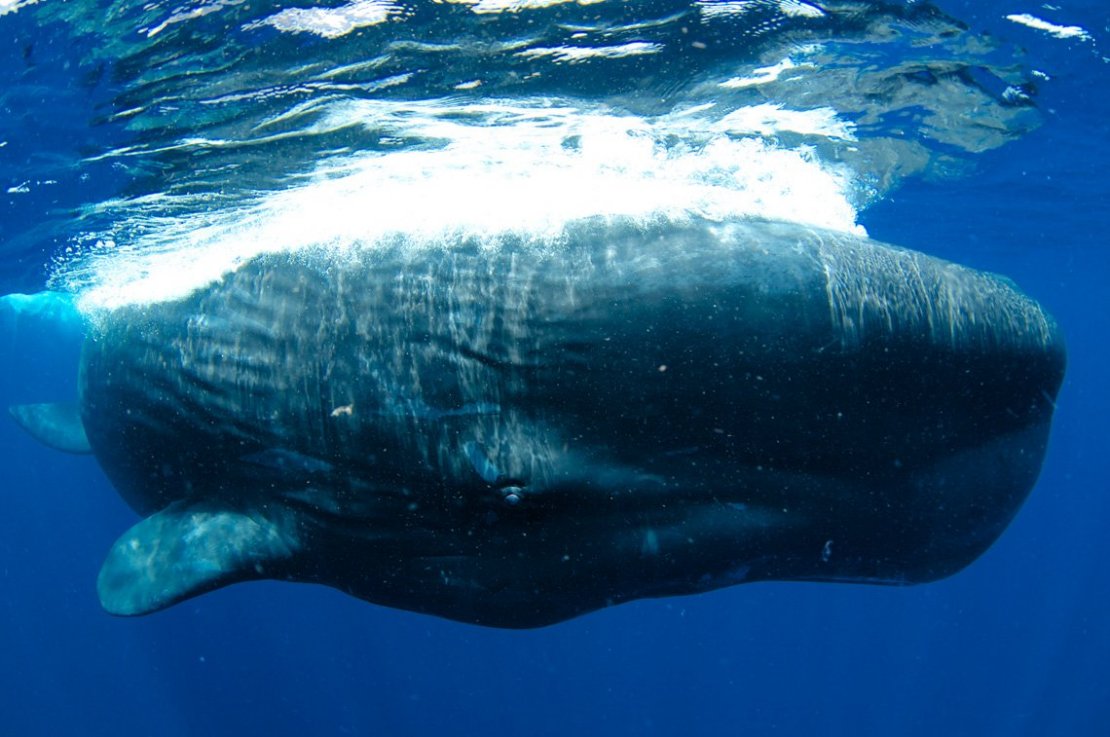 Sperm whales, especially males, have an extraordinarily large head. Males usually have a head that is about a third of their body length. It is no wonder then that a mature male’s brain weighs an average of 7 kg, but specimens with a brain of more than 9 kg have also been registered. Sperm whales have 20 to 26 pairs of tapered teeth in the lower jaw, each weighing up to one kilogram. The reason for the presence of teeth is not entirely clear. According to experts, they are unnecessary for squid hunting, and well-nourished specimens with absolutely no teeth have been found in the wild. Therefore, scientists tend to agree that males can use their teeth to attack each other. Unlike the smooth skin of most other whales, the skin of this whale is wrinkled and is sometimes compared to prunes. At the top of the head, there is an S-shaped blowhole through which water is blown as a geyser at an angle and about 5 metres in height. This makes sperm whales quite easy to recognise. Anatomical differences between males and females are more noticeable in sperm whales than in any other cetacean. Males are usually 30-50% longer (16 to 18 m) than females (12 to 14 m) and about twice as heavy (50 tonnes vs 25 tonnes). At birth, both males and females are approximately 4 metres long and weigh 1,000 kg.

Sperm whales live in family groups that include several females with offspring, and sometimes a leading male. Males keep their females in a kind of a harem, especially during breeding. They fight fiercely with other males for females. The social structure of sperm whales varies considerably between sexes. Females are extremely social. Young offspring gather in groups of about 12 individuals. Males leave their “kindergartens” at the age of 4 to 21. They then join the so-called bachelor groups, which include other males of similar age and size. As they grow older, males tend to divide into smaller groups, and the oldest males tend to live solitary lives. However, adult males remain together in cases of emergency, indicating a level of cooperation that has not yet been fully explained. 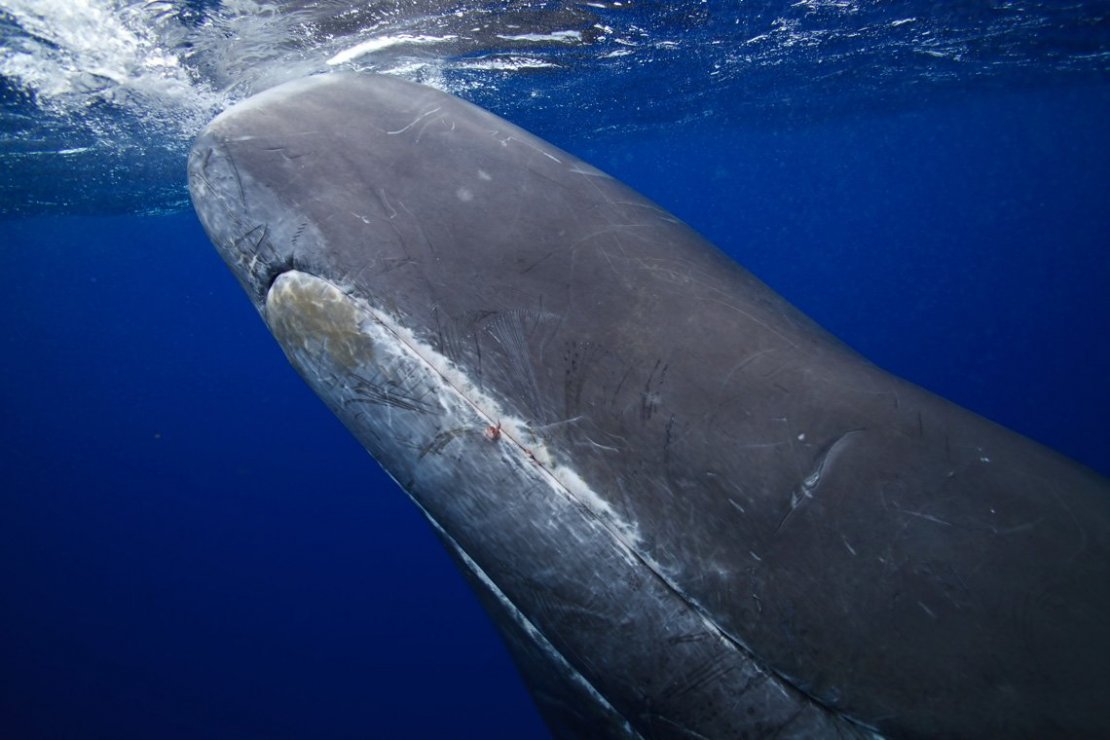 Sperm whales have a very well-developed underwater sonar that allows them to communicate with each other at a distance of several kilometres. They have an overly sensitive echolocation that can pinpoint a 10 cm target from about a kilometre away. No other communication sounds, such as whistling, rustling, or moaning, commonly used by other toothed cetaceans, have been observed in sperm whales. They communicate with each other using a stereotypical, zigzag sound. These are codes that we, too, can clearly hear.

The sperm whale is a prime example of an animal that has been K-selected, meaning the species are believed to have evolved under fairly stable living conditions. As a result of this relatively “simple” development, the birth rate of sperm whales is low, maturation is slow, and the life span is long. Females become pregnant every 4 to 6 years. Pregnancy lasts for at least 12 months but can extend to 18 months. It takes 2 to 3 years to take care of the offspring. Male puberty begins between the ages of 10 and 20 but continues through their 30s. By the age of 50, whales will reach their full size. 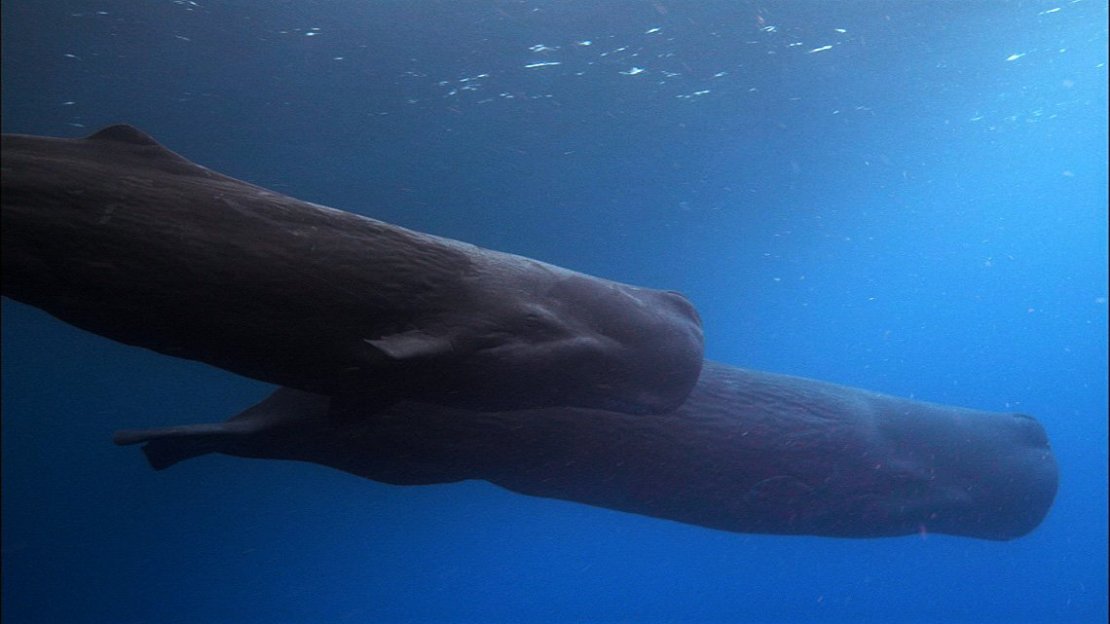 Sperm whales are one of the most common whale species in the world. They are relatively abundant from Arctic waters to the equator. The total number of sperm whales worldwide is unknown, but it’s estimated to be between 200,000 and 600,000 specimens (probably around 360,000). Although they’ve been hunted for centuries for meat, oil (used in lubricants), and spermaceti (used in candles), the situation of sperm whales is more optimistic than that of many other whales. Sperm whales are protected virtually all over the world, and fishermen don’t fish the deep-sea creatures that belong to the whales’ diet.

Daily consumption of food: 3% of their weight
Natural habitat: from Arctic waters to equator
Offspring: 1 young every 4 to 6 years
Length of a newborn: 4 m
Weight of a newborn: 1,000 kg
Sexual maturity: between the age of 30 and 40 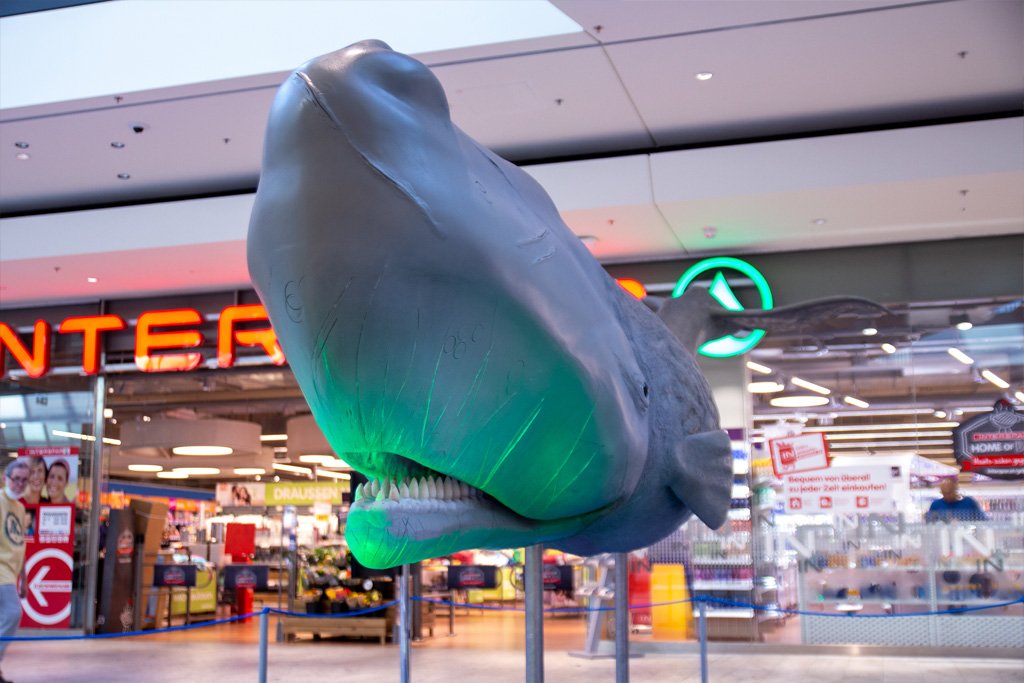 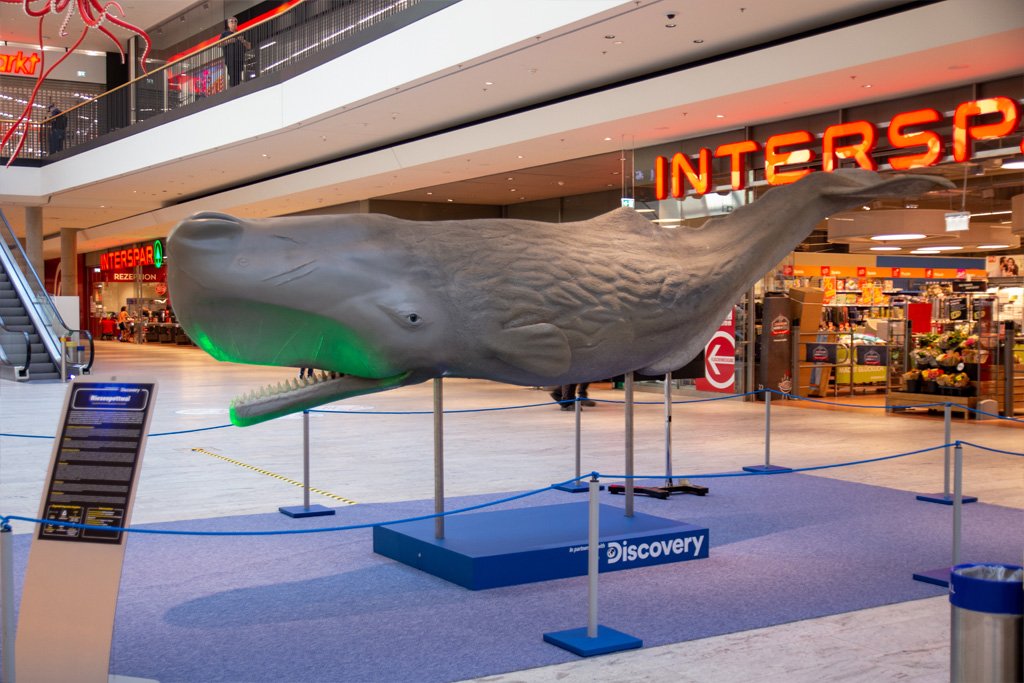